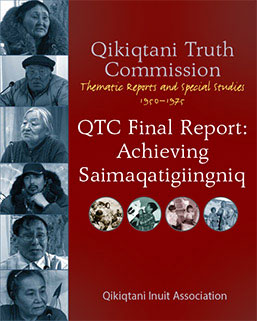 From 2007 to 2010, the Qikiqtani Truth Commission (QTC) interviewed almost three hundred and fifty witnesses during public hearings, reviewed one hundred and thirty interviews taped by the Qikiqtani Inuit Association (QIA) between 2004 and 2006, and amassed an authoritative collection of historical documentation about the relationships among Inuit and governments from 1950 to 1975. Through this work, it documented in detail many of the decisions, actions, and consequences that led to the social and economic transformation of the Baffin Region. The primary product of the QTC is this report, written by the Commissioner James Igloliorte.